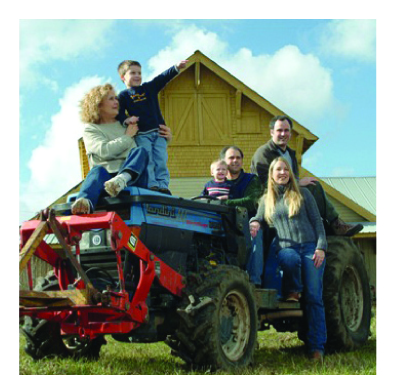 Originally from San Jose, California, Cheryl Stewart and husband Ron seemed unlikely candidates for organic farming given their ownership of several dry cleaning stores. However, according to Stewart, they always wanted to buy a farm, particularly a fruit orchard. So in 1975, the couple purchased a motor home, packed up their three young sons and began touring farming states throughout the West, including Washington, Idaho and Oregon. “We always wanted to get out into the country and raise some great tasting fruit,” says Stewart. “We’re a very adventurous family, so we moved on and never looked back.”

The Stewarts found their 95-acre farm that same year and began planting trees with plenty of what Stewart calls “on the job training,” making the decision to go organic in 1989. The change, she says, was the result of her own background as a nutritionist and sons Ronny and Jimmy’s desire to eschew conventionally grown fruit in favor of sustainable farming practices.

“They said, let’s just go cold turkey, and start farming organic,” recalls Stewart. “It was as simple as that. Besides, we all love bugs and wanted to keep all the good ones in the orchard, like ladybugs and lacewings. I think we were one of the first in the area to move in this direction and even now, although there are lots of fruit orchards in the Hood River Valley, only about six farm organic.”

Having purchased an additional 80 acres, Stewart finds the Hood River soil an integral component to the region’s abundance of orchards. “This is a gorgeous valley with a lot of volcanic ash in the soil which is especially perfect for fruit,” contends Stewart.

Regardless of soil, growing great healthy food is the guiding philosophy for the family. “When you grow certified organic,” maintains Stewart,” you know that what anyone drinks or eats is perfect for their health and body. In a world of many unsafe or unknown products, we know what we are doing is good.”